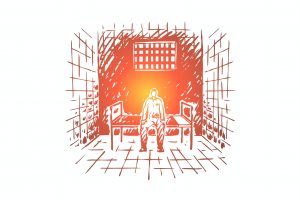 “Continue to remember those in prison as if you were together in prison, and those who are mistreated as if you yourselves were suffering.” – Hebrews 13;1-3

How do people get to prison and how do they manage after incarceration? Here is one person’s story.

She had been incarcerated for 8 years for possession of a controlled substance, methamphetamine, which she used to self-medicate before being incarcerated. While in prison, nobody came to visit her and she had little to do with the medical staff. She was diagnosed with Schizophrenia because she believed that beings from another plane of reality were trying to take her over. Prison frightened her because she was away from her cats- her protectors. She refused medication because she thought it was poisoned.

After finishing her sentence, she was lucky to get a job at a restaurant where she worked in the kitchen, by herself. She said that the owner “understood me and was patient with me. He encouraged her to get and stay on medication. She worked for five years before the ownership of the restaurant changed and the new owner pressured her to have more contact with the public, not recognizing her difficulty being around strangers. She had been afraid of others and withdrawn socially since she was 6 years old.

She stopped taking her medication, got more and more delusional and was fired because she had conflicts with customers whom she thought were beings from the other plane. She had been off medication and living with her protectors, her cats, since losing her job.

Like many, her story illustrates several important points about mental illness: signs of illness frequently appear early in a person’s life; many people with mental illness self-medicate; jails have become the de-facto mental hospitals in our country; and, with treatment and support, mentally ill people can function productively and well enough that they are satisfied with their life.

The CDC reports estimates that 1 in 6 children ages 2-8 years old have mental, behavioral and/or developmental disorders. The rates of depression and anxiety increase as children get older. Parents and other significant people in children’s lives can identify problems early and facilitate treatment.

Though the woman whose story we are sharing withdrew from social contact early, reported seeing people at the end of her bed at night who were not there, and had difficulty getting along with her family, they did not recognize the signs as an illness. They thought of her as a stubborn child, needing discipline rather than treatment. At 18, she married and left home. The relationship ended with her being abused. She ended up on the streets, “surviving any way I could.” Surviving included drug use and being with one abusive person after another.

SELF-MEDICATION:  According to reports in the Journal of the American Medical Association: about 50% of severely mentally ill people are affected by drug and alcohol abuse; 37% of alcohol abusers and 53% of drug abusers have at least 1 severe mental illness; and 29% of all people diagnosed as mentally ill abuse alcohol and/or drugs. Recent work with victims of psychological trauma suggests that alcohol and drug use is best thought of as people’s attempts at coping with the overwhelming sense of helplessness, worthlessness and shame experienced by victims.

While on the streets, the woman above was using “street drugs”, including methamphetamine, to self-medicate. She was arrested for possession of a controlled substance and incarcerated. She was remanded over to a system that has become the de-facto mental health system in the US and which is not prepared for the job.

DE FACTO HOSPITALS:  Since the 1960s, large mental health facilities have closed, decreasing services to the mentally ill by 90%.  During the same time period, the prisoner population more than tripled. In 2018, the Bureau of Justice Statistics reported that 14% of prisoners in state and federal prisons had serious mental health problems. They estimated that 26% of prisoners in local jails were seriously mentally ill. In Texas, it was estimated that 21% of state prisoners were mentally ill.

Currently, Bexar County jail has 200 beds reserved for the mentally ill while the San Antonio State Hospital has 302 beds for 54 counties in South Texas. It is estimated that 30% of inmates in the Bexar County Jail are suffering from some form of mental illness. Police take approximately 1200 people a month to the Crisis Center; the majority of whom have committed minor offenses, to get them treatment they need rather than incarceration.

REHABILITATION:   The treatment of both substance abuse and mental illness has proven effective in restoring or developing people’s ability to cope and or function at a level with which they are satisfied and which keeps them from being incarcerated.

The National Rehabilitation Information Center reports that in a sample of over 41,000 people, about 17% had been diagnosed with a serious mental illness. From 25% to 58% of seriously mentally ill people reported being in recovery with rates of recovery dependent on age. Over a lifespan, older people with severe mental illness reported a better quality of life and greater participation in meaningful life activities than younger people.

SUPPORTING RECOVERY: According to MentalHealth.gov there are four dimensions of a person’s life that support recovery from mental illness: making health supporting choices; having a safe place to live; engaging in meaningful activities daily; and building relationships that provide support.

NAMI points out that 83% of jail inmates living with mental illness not receive mental health treatment.

The woman above had been able to function for five years after incarceration because she chose to get appropriate treatment, had a safe and secure environment (both in the form of her house and her work space, since people understood her and supported her), was able to work and support herself (giving her a reason to get up each day- a purpose) and had a supportive community that encouraged her to take her medication and care for herself.

After losing her job, she quit taking her medication, in part because she had nobody to reassure her that it was what she needed, it was safe and it was helping her function. She had withdrawn from others and was isolated in her house because it felt safe but there was nobody there to gently challenge her delusions. She had nobody to check on her or support her.

LET’S TALK: So, what can we learn from all of this? We might start a conversation on how we, as individuals and as a congregation, might work with people like the woman in our story by considering three questions:

What is our intent?

What would we talk to her about?

What are our skills?

What is the need?

What can we do to help?

How do we make our church feel open and accepting to people who are mentally ill and who have been incarcerated in a way that honors them and us?

“Blessed are the peacemakers because they shall be called children of God.”